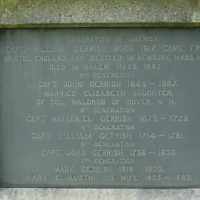 When Capt. William Gerrish was born on 20 August 1617, in Bristol, England, his father, Capt William Gerrish Sr, was 26 and his mother, Anne Martin, was 19. He married Joanna Lowell on 17 April 1645, in Newbury, Essex, Massachusetts Bay Colony, British Colonial America. They were the parents of at least 5 sons and 5 daughters. He lived in Hampton, Rockingham, New Hampshire, United States in 1663 and Boston, Suffolk, Massachusetts, United States in 1664. He died on 9 August 1687, in Salem, Essex, Massachusetts Bay Colony, British Colonial America, at the age of 69, and was buried in Forest Grove Cemetery, Lebanon, York, Maine, United States.

"The Pilgrims boarded the Mayflower in search of religious freedom in the New World in September 1620. The Mayflower set sail from Plymouth, England, with 102 passengers, 40 of whom called themselves ""Saints."" After two stormy months at sea, the ship reached the New World. Nearly half of the group died during their first winter due to malnutrition and the harsh New England winter."
1622

William resided at Newbury, Mass. He and Joanna Lowell had ten children; he and Ann Parker had one child. William was first Captain of the Militia in Newbury. After Joanna died he moved to Bos …