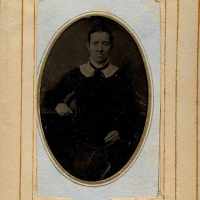 The Life of Keneressa Caroline

Put your face in a costume from Keneressa Caroline's homelands.

In 1860, the Pony Express used men riding on horseback to carry mail between St. Joseph, Missouri, and Sacramento, California.
1860 · Ohio supports the Union side of the Civil War

Although divided as a state on the subject of slavery, Ohio participated in the Civil War on the Union's side, providing over 300,000 troops. Ohio provided the 3rd largest number of troops by any Union state.
1868 · Impeach the President!

English: habitational name from any of various places, in Bedfordshire, Dorset, Hampshire, Norfolk, Oxfordshire, Somerset, Suffolk, Surrey, and Wiltshire, so named from Old English strǣt ‘paved high-way’, ‘Roman road’( see Street ) + tūn ‘enclosure’, ‘settlement’. A place of the same name in Cornwall, which may also be a partial source of the surname, probably has as its first element Cornish stras ‘valley’.