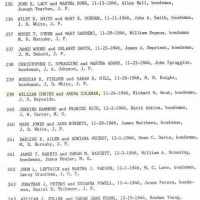 The Alabama Enabling Act was signed on March 2, 1819, by President James Monroe. This enabled the people to form a constitution and state government which paved the way for Alabama to enter the union.
1849 · Capitol Building Destroyed by Fire

Americanized spelling of Dutch Conyn or Konijn, from Middle Dutch conijn ‘rabbit’, hence a metonymic occupational name for a dealer in rabbits, or a nickname for someone thought to resemble a rabbit.