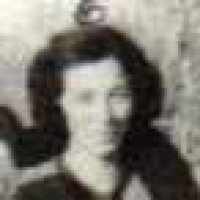 The Life of Bertha Pearl May

When Bertha Pearl May Lamb was born on 17 May 1911, in Binscarth, Manitoba, Canada, her father, William John Rossington Lamb, was 21 and her mother, Esther Ann Ducharme, was 23. She married Edward Pell in 1940, in Winnipeg, Manitoba, Canada. She lived in Manitoba, Canada in 1916. She died on 19 June 2002, in Nelson, British Columbia, Canada, at the age of 91, and was buried in Thunder Bay, Ontario, Canada.

Put your face in a costume from Bertha Pearl May's homelands.