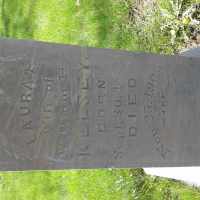 The Life Summary of Laura Esther

When Laura Esther Street was born on 30 September 1852, in Croydon, Surrey, England, United Kingdom, her father, Thomas Gray Street, was 33 and her mother, Esther Harriet Huggett, was 26. She married William Henry Kelsey on 13 March 1876, in Endowment House, Salt Lake City, Salt Lake, Utah, United States. They were the parents of at least 3 daughters. She lived in Camberwell, Surrey, England, United Kingdom in 1861. She died on 25 November 1908, in Provo, Utah, Utah, United States, at the age of 56, and was buried in Historic Springville Cemetery, Springville, Utah, Utah, United States.

Put your face in a costume from Laura Esther's homelands.