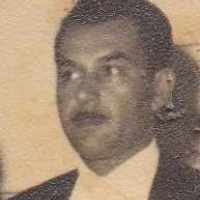 When Jose Luiz Da Rosa was born on 18 December 1926, in Tupanciretã, Rio Grande do Sul, Brazil, his father, Marcelino Antonio Da Rosa, was 32 and his mother, Antonia Pinheiro Da Silva, was 23. He married Eva Rodrigues da Rosa on 29 December 1956, in Niterói, Rio de Janeiro, Brazil. They were the parents of at least 1 son. He died on 27 August 1986, in Niterói, Rio de Janeiro, Brazil, at the age of 59.

Put your face in a costume from Jose Luiz's homelands.

North African (Muslim): probably from a personal name based on of Arabic ḍiyā ‘light’, ‘glow’, ‘illumination’.