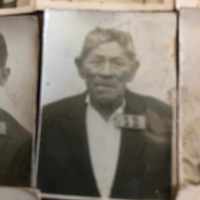 The Life of Francisco

Francisco Arruda was born in 1899, in Acarapé, Ceará, Brazil as the son of Pedro Pereira de Arruda and Francisca Maria Da Conceição. He married Lucas Maria da Conceição in São Simão, São Paulo, Brazil. They were the parents of at least 2 daughters. He died on 17 December 1974, in Jacarezinho, Paraná, Brazil, at the age of 75.

Put your face in a costume from Francisco's homelands.

Portuguese: habitational name, probably in most cases from Arruda dos Vinhos, a place north of Lisbon, which takes its name from the plant arruda ‘rue’ (from Latin rūta).