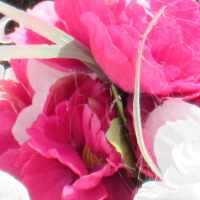 The Life of Ruby Myrtle Amelia

When Ruby Myrtle Amelia Atkins was born on 19 September 1907, in New Zealand, her father, George Dobson Atkins, was 32 and her mother, Mona Elfleda Farewell York, was 28. She married Claude Alfred Barnett on 22 April 1930, in New Zealand. She died on 13 August 2001, in her hometown, at the age of 93, and was buried in Riwaka Cemetery, Riwaka, Tasman, Nelson, New Zealand.

Put your face in a costume from Ruby Myrtle Amelia's homelands.