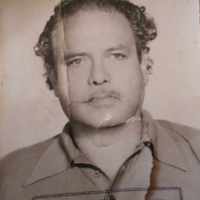 The Life of Carlos Eduardo

When Carlos Eduardo Gutierrez Poire was born on 12 March 1920, in Mexico City, Mexico, his father, Carlos Esteban Gutierrez Sarmiento, was 25 and his mother, Amelia Poire Ramirez, was 19. He married Lidia Alcantara Echavarria in 1951, in Mexico City, Mexico. They were the parents of at least 4 sons. He died on 23 April 2003, in Torreón, Coahuila, Mexico, at the age of 83, and was buried in Torreón, Coahuila, Mexico.

Put your face in a costume from Carlos Eduardo's homelands.

"BY decree of the ""Organic Law"", the Federal District of Mexico City is divided into 80 boroughs, and 16 districts."
1943 · El Colegio Nacional�founded

In 1943, the honorary academy, dedicated to the sciences and arts, is constructed by presidental decree. The goal is to bring the best scientists and artists together and give exclusive lectures, in their respective fields.

Spanish (Gutiérrez): patronymic from the medieval personal name Gutierre, from a Visigothic personal name of uncertain form and meaning, perhaps a compound of the elements gunþi ‘battle’ + hairus ‘sword’.