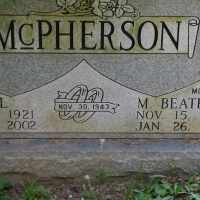 The Life Summary of Buel Edward

Put your face in a costume from Buel Edward's homelands.

Scottish: Anglicized form of Gaelic Mac a' Phearsain ‘son of the parson or priest’ (see Parsons ).History: This is the name of a Highland Scottish clan, part of the Chattan confederation, the founder of which is believed to have been a man named Muireach or Murdo Cattenach, priest of Kingussie in Badenoch in the 9th century.