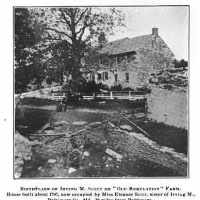 When Abraham Scott Jr. was born in 1731, in Bucks, Pennsylvania, British Colonial America, his father, Abraham Scott, was 42 and his mother, Elizabeth Dyer, was 23. He married Elizabeth Rossiter on 7 January 1750, in Pennsylvania, United States. They were the parents of at least 6 sons and 6 daughters. He died on 29 March 1804, in Baltimore, Maryland, United States, at the age of 73.

History for Abraham Scott and family

Noted on Find a Grave by a thorough researcher: Abraham Scott, Jr., (c.1731 - 29 Mar 1804) was born in Buckingham Township to Abraham Scott, Sr., and Elizabeth (Dyer) Scott. According to the land re …