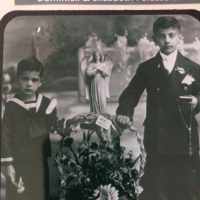 The Life of Carlo or "Carl"

Learn about Carlo or "Carl"'s homeland.

Put your face in a costume from Carlo or "Carl"'s homelands.

The Detroit Zoological Society was founded in 1911, but the zoo didn't officially open until August 1, 1928. At the opening ceremony, Mayor John C. Nagel was to speak to the gathered crowd. Arriving late, Nagel parked his car behind the bear dens and as he came rushing around the front. A polar bear leaped from the moat in the den and stood directly in front of Nagel. Unaware how precarious his situation was, Nagel stuck out his hand and walked toward the polar bear joking, ""He's the reception committee. The Detroit Zoo was the first zoo in America with cage-less exhibits and the first zoo to no longer keep elephants because of the harsh winters causing psychological stress on them.
1946 · Russell Kelly Office Service

Russell Kelly Office Service is an American office staffing company that operates globally. It was founded by William Russell Kelly in 1946, initially providing office services performed at Kelly's offices rather than at the client's. However, customers asked for the work to be performed at their own offices, and the temporary staffing concept was born in the same year. The temporary workers, usually female, became known as "Kelly girls" and the company name was changed to Kelly Girl Service, Inc. in 1957.