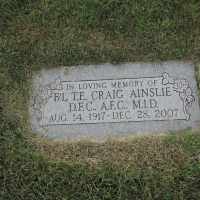 The Life of Craig

Put your face in a costume from Craig's homelands.

English and Scottish: habitational name from Ansley in Warwickshire or Annesley in Nottinghamshire ( see Ansley ). The modern surname is found chiefly in the border regions of Scotland and northern England, having been taken north from England to Scotland in the Middle Ages, probably by a Norman baron.

There are no historical documents attached to Craig.