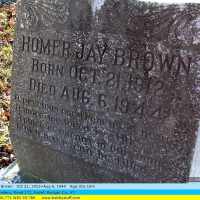 The Life of HOMER JAY

Put your face in a costume from HOMER JAY's homelands.

The Sixteenth Amendment allows Congress to collect an income tax without dividing it among the states based on population.
1913 · Cleveland Museum of Art

The Cleveland Museum of Art was founded as a trust from Hinman Hurlbut, John Huntington, and Horace Kelley. It is to be known as the fourth-wealthiest art museum in the United States. The museum opened its doors to the public on June 6, 1916, and is free to the public to come and enjoy the diverse collections inside. Today the museum can be found as the center piece of Wade Park and both are on the National Register of Historic Places.
1923 · The President Dies of a Heart Attack

There are no historical documents attached to HOMER JAY.