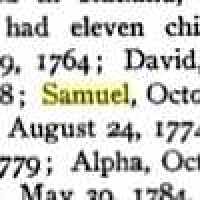 English (Yorkshire): of uncertain origin, probably from Middle English metecalf ‘food calf’, i.e. a calf being fattened up for eating at the end of the summer. It is thus either an occupational name for a herdsman or slaughterer, or a nickname for a sleek and plump individual, from the same word in a transferred sense. The variants in med- appear early, and suggest that the first element was associated by folk etymology with Middle English mead ‘meadow’, ‘pasture’.