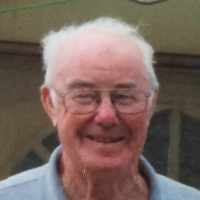 The Life of Barry James

Put your face in a costume from Barry James's homelands.

Australia joins Britain in declaration of war on Germany.
1940