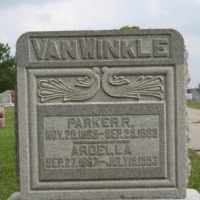 The Life of Ardella

When Ardella Cook was born on 27 September 1867, her father, John Farley Cook, was 38 and her mother, Sarah Ann Maria Ham, was 20. She had at least 1 son and 1 daughter with Parker Robert Van Winkle. She lived in Harrison Township, Henry, Indiana, United States for about 10 years. She died on 19 July 1953, at the age of 85, and was buried in Mechanicsburg Cemetery, Mechanicsburg, Henry, Indiana, United States.

Put your face in a costume from Ardella's homelands.