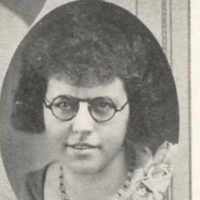 The Life of Mary Ruth

Put your face in a costume from Mary Ruth's homelands.

The Sixteenth Amendment allows Congress to collect an income tax without dividing it among the states based on population.
1935 · The FBI is Established

Americanized spelling of Swiss German Grumbacher or German Krumbacher, habitational names for someone from Grumbach in Switzerland or from any of several places named Krumbach in southern and eastern Germany.

Memorial from Find a Grave