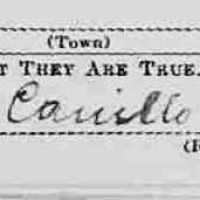 The Life of Camillo

Put your face in a costume from Camillo's homelands.

A landmark decision of the U.S. Supreme Court upholding the constitutionality of racial segregation laws for public facilities if the segregated facilities were equal in quality. It's widely regarded as one of the worst decisions in U.S. Supreme Court history.
1913 · The Woolworth Building Opens as the Tallest Building in the World

At 792 feet above Broadway, the Woolworth Building became the tallest building in the world and held the record for 17 years. The Woolworth Building was overshadowed by the Chrysler Building at 1,046 feet in 1930 and the Empire State Building at 1,454 feet in 1931. Retailer and mogul Frank W. Woolworth commissioned the Woolworth Building in 1910 with the intent of his namesake building to be the tallest in the world. The 13 million dollar project was financed in cash by Woolworth which allowed him freedoms in the design and construction of the ornate, gothic building. An opening ceremony was held on April 24, 1913 at which President Woodrow Wilson pressed a button from the White House and lit the historic building in New York City.
1917 · Women Given the Right to Vote in New York

North African (Muslim): probably from a personal name based on of Arabic ḍiyā ‘light’, ‘glow’, ‘illumination’.