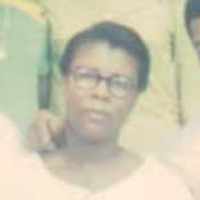 Dorcina Darius was born on 17 August 1911, in Haiti as the daughter of Chatélas Gessé and Clotilde Darius. She had at least 1 daughter with Louis Viau. She lived in Brooklyn, New York City, New York, United States in 1970. She died on 9 May 1996, in Miami, Dade, Florida, United States, at the age of 84.

Put your face in a costume from Dorcina's homelands.

Like the Boy Scouts of America, The Girl Scouts is a youth organization for girls in the United States. Its purpose is to prepare girls to empower themselves and by acquiring practical skills.
1915

President Woodrow Wilson orders the U.S. Marines to occupy Haiti and establish control over customs-houses and port authorities. The Haitian National Guard is created by the occupying Americans. The Marines force peasants into corvée labor building roads. Peasant resistance to the occupiers grows under the leadership of Charlemagne Peralt, who is betrayed and assassinated by Marines in 1919.
1934

The U.S. withdraws from Haiti leaving the Haitian Armed Forces in place throughout the country.

French: from the Late Latin personal name Darius, Greek Dareios, which was borne by various kings of ancient Persia, including Darius I ( 522–486 bc ). The ancient Persian form of the name was Darayavahush, meaning ‘possessor’, from daraya(miy) ‘possess’, ‘maintain’ + vahu ‘good’, ‘well’. This became accepted as a Christian name in medieval Europe in honor of a saint martyred at Nicaea at an uncertain date.