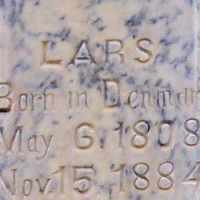 When Lars Pedersen was born on 10 May 1808, in Kogsbølle, Vindinge, Nyborg, Denmark, his father, Peder Hansen, was 34 and his mother, Giertrud Hansdatter, was 26. He married Maren Mogensdatter on 12 April 1851, in Herrested, Ørbæk, Fyn, Denmark. They were the parents of at least 2 sons and 2 daughters. He lived in Hellerup, Vindinge, Svendborg, Denmark for about 5 years. He died on 15 November 1884, in Fillmore, Millard, Utah, United States, at the age of 76, and was buried in Millard, Utah, United States.