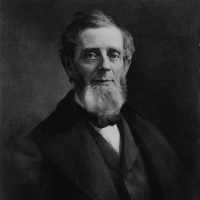 The Life Summary of George Palmer

Put your face in a costume from George Palmer's homelands.

English (Middlesex and Buckinghamshire): habitational name from either of two places, in Hertfordshire and Surrey, called Puttenham, from the genitive case of the Old English byname Putta, meaning ‘kite’ (the bird) + Old English hām ‘homestead’.History: John Putnam emigrated from England to Salem, MA, before 1641, and established a family that was still prominent in Massachusetts four generations later, including the revolutionary war soldier Israel Putnam (1718–90) and his cousin Rufus Putnam (1738–1824), also a soldier, one of the first settlers in OH.