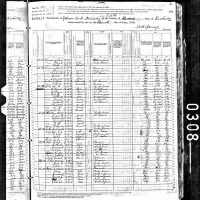 The Life of Permelia Jane

Put your face in a costume from Permelia Jane's homelands.

The Louisville and Portland canal opened in 1830. It was a 2 mile canal. It helped with the barrier caused by the Falls of the Ohio River at Louisville by making a route around them.
1836 · The Massive Internal Improvements Act

The Massive Internal Improvements Act of 1836 loaned Indiana $10,000,000 to create infrastructure such as canals, railroads, and roads across the state. The act was signed by Whig Governor Noah Noble and passed by the Indiana General Assembly. However, the financial crisis known as the Panic of 1837 thwarted these plans as costs ballooned. Construction on the infrastructure was not completed and the state debt rapidly increased.
1841 · Indiana Nears Bankruptcy

1 Irish: reduced form of O’Hayden, an Anglicized form of Gaelic Ó hÉideáin and Ó hÉidín ‘descendant of Éideán’ or ‘descendant of Éidín’, personal names apparently from a diminutive of éideadh ‘clothes’, ‘armor’. There was also a Norman family bearing the English name (see 2 below), living in County Wexford.2 English: habitational name from any of various places called Hayden or Haydon. The three examples of Haydon in Northumberland are named from Old English hēg ‘hay’ + denu ‘valley’. Others, for example in Dorset, Hertfordshire, Somerset, and Wiltshire, get the name from Old English hēg ‘hay’ (or perhaps hege ‘hedge’ or (ge)hæg ‘enclosure’) + dūn ‘hill’.3 Jewish: see Heiden .