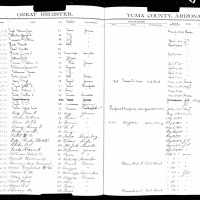 The Life of Alfred Brock

Put your face in a costume from Alfred Brock's homelands.

Hostilities between Modoc Indians and white settlers resulted in the Modoc War during 1872-1873. A Modoc band of nearly 200 people, led by Captain Jack Kintpuash, was fleeing a forced relocation to a reservation occupied by their enemies, the Klamaths. The band had returned to their former land on Lost River, which now had white settlers occupying the area. The conflict erupted on November 29, 1872, when 40 troops were sent to move the Modocs back to the reservation. An argument erupted and shots were fired. Several were killed and the Modocs fled to “The Stronghold,” a large, cavernous lava bed. The holdout went on for months with several clashes. On April 11, 1873, General Edward Richard Sprigg Canby and Reverend Eleazar Thomas were killed by the Modocs during a negotiation. The Modocs lacked resources and supplies and eventually surrendered on July 4. In total, 2 Modocs and 71 enlisted military men lost their lives.
1904 · William H. Fuller Grows 70 Acres of Rice

Rice is one Arkansas leading crops, in 1904 William H. Fuller planted 70 acres of rice, this act is what started the making rice the leading crop in Arkansas.