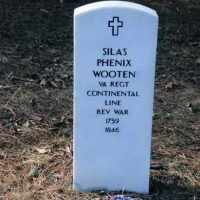 The Life of Silas Phenix

When Silas Phenix Wooten was born in 1759, in Isle of Wight, Isle of Wight, Virginia, British Colonial America, his father, John Wooten Sr., was 35 and his mother, Mary Johnston, was 25. He married Phoebe Worth. They were the parents of at least 6 sons and 3 daughters. He registered for military service in 1844. He died on 25 February 1846, in Lawrence, Kentucky, United States, at the age of 87, and was buried in Louisa, Lawrence, Kentucky, United States.

Put your face in a costume from Silas Phenix's homelands.

English: habitational name from any of the extremely numerous places named with Old English wudu ‘wood’ + tūn ‘enclosure’, ‘settlement’, such as Wootton in Northamptonshire or Oxfordshire, Wootton Bassett in Wiltshire, Wotton in Surrey, and Wotton under Edge in Gloucestershire.