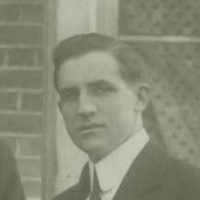 The Life of Sherman Douglas

Put your face in a costume from Sherman Douglas's homelands.

English: occupational name for an outrider, from Middle English rid(en) ‘to ride’ + out ‘out’, ‘forth’. An outrider (Middle English outridere) was an officer of a sheriff's court or of a monastery whose duties included riding out to collect dues and supervise manors.