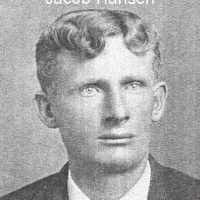 The Life of Jacob P.

Put your face in a costume from Jacob P.'s homelands.

JACOB AND JULIA HANSEN by Clyde Hansen published in a book about residents of Holbrook Jake Hansen worked for a large sheep outfit out of Malta, Idaho. His job was to keep supplies to all their shee …