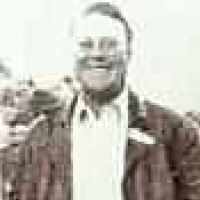 The Life of Wayne

Put your face in a costume from Wayne's homelands.

This grandfather died when I was little, but I remember he was very quiet.