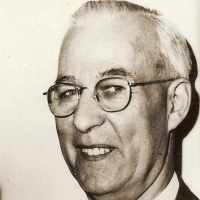 Daddy was such a gentle man. He never corrected us using physical force. But he could sure give you an tongue lashing and you never forgot what he said. He had a way of telling you something that y …