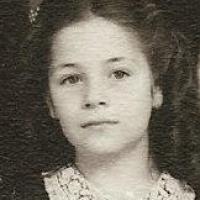 The Life of Doris Jolene

Put your face in a costume from Doris Jolene's homelands.

Construction on the Fort Peck Dam started in 1933. It is the highest of six major dams along the Missouri River. It is located in the northeastern part of Montana near Glasgow and Fort Peck.
1948 · The Beginning of the Cold War

1 English (Shropshire; of Norman origin): nickname meaning ‘little crow’, ‘raven’, from Anglo-Norman French, Middle English corbet, a diminutive of corb, alluding probably to someone with dark hair or a dark complexion. The name was taken from Shropshire to Scotland in the 12th century and to northern Ireland in the 17th century, and thence to North America by one group of bearers of the name.2 Irish: see Corban .