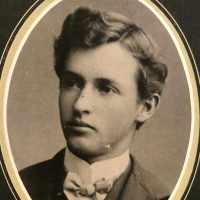 Y'tte, past of ytan, to out, to drive out, to expel, to banish; ere, an agent. One expelled; an exile