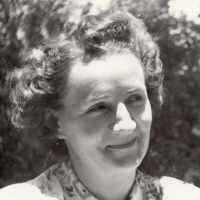 When Ruth Allred was born on 19 October 1913, in Raymond, Warner, Alberta, Canada, her father, J Urban Allred, was 39 and her mother, Edna Bingham, was 24. She married Clarence Eugene Dallimore on 9 July 1940, in Logan Utah Temple, Logan, Cache, Utah, United States. They were the parents of at least 1 daughter. She lived in Lethbridge, Alberta, Canada in 1926. She died on 6 February 2003, in Idaho Falls, Bonneville, Idaho, United States, at the age of 89, and was buried in Ammon Cemetery, Bonneville, Idaho, United States.

Memories of my Grandma Dallimore, by Eric Petersen

My grandma Ruth Dallimore was a typical chocolate chip cookie making grandma. (I believe I have her recipe - they were soft good and still remind me of sitting at her bar stools eating them by the fi …