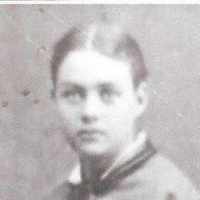 The Life of Anna Mathilda

When Anna Mathilda Flygare was born on 31 March 1857, in Svedala, Malmöhus, Sweden, her father, Carl August Roslind Flygare, was 27 and her mother, Marna Olsdotter, was 36. She married John Evert on 28 February 1878. They were the parents of at least 3 sons and 5 daughters. She died on 22 June 1941, in Lovell, Big Horn, Wyoming, United States, at the age of 84, and was buried in Lovell Cemetery, Big Horn, Wyoming Territory, United States.

Put your face in a costume from Anna Mathilda's homelands.

Big Ben is the name of the bell that is inside the clock tower. It is one of the most famous landmarks in London. The famous ringing from Big Ben is the result of it cracking four months after opening.
1863

This testimony was found in my father's, Arthur Lawrence Evert, journal. He kept this testimony of his grandmother with him.

Anne Mathilda Flygare I was born at Malmo, Sweden 31 March 1857; baptized October 1870. One of my cousins from Ogden, Utah, N. E. Flygare was President of the European Mission. When he was released to …