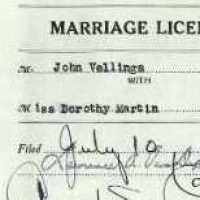 When Johanus Vellinga was born on 25 March 1908, in Rotterdam, South Holland, Netherlands, his father, Pieter Adrianus Vellinga, was 32 and his mother, Clazina Stapel, was 36. He married Dorothy Martin on 9 July 1933, in Ogden, Weber, Utah, United States. They were the parents of at least 1 daughter. He immigrated to Ellis Island, New York City, New York, United States in 1911. He died in August 1986, at the age of 78.

Put your face in a costume from Johanus's homelands.

Founded in 1913 by some of Rotterdam's most prominent entrepreneurs, the Netherlands School of Commerce received almost unanimous support from the local business community. It would be rebranded in 1973 as Erasmus University.
1929