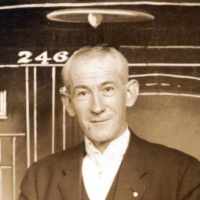 The Life Summary of Charles James

Put your face in a costume from Charles James's homelands.

English (Devon and Somerset): habitational name from one or more of the many minor places called Nethercott in Devon (the placename occurs in the parishes of Alverdiscott, Braunston, Broadwood Kelly, Broadwoodwidger, Chawleigh, Iddesleigh, Lifton, Oakford, Parkham, Rose Ash, Spreyton, and Tetcott), or from Nethercote (Northamptonshire), or from Nethercote in Lewknor or Nethercott in Tackley (both in Oxforshire). All of the placenames derive from Middle English nether ‘lower’ + cot ‘cottage’ (Old English neothera, cot), except Nethercote in Lewknor, Oxfordshire, which derives from Middle English other ‘other’ (Old English ōther) + cot, with the N- due to misdivision of Middle English atten other.

https://rsc.byu.edu/archived/california-saints-150-year-legacy-golden-state/chapter-13-new-beginnings This is an article published by BYU Religious Studies Cut and paste the address above to read th …