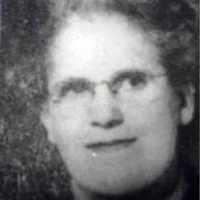 The Life of Jennie Myrle

When Jennie Myrle Pyper was born on 20 April 1891, in Fairview, Sanpete, Utah, United States, her father, James Munro Gardner Pyper, was 43 and her mother, Nancy Jane Caldwell, was 35. She married Thomas Ernest Albiston on 20 December 1911, in Salt Lake, Utah, United States. They were the parents of at least 3 sons and 5 daughters. She lived in Alberta, Canada in 1916 and Lethbridge, Alberta, Canada in 1926. She died on 29 November 1959, in Vancouver, British Columbia, Canada, at the age of 68, and was buried in Vancouver, British Columbia, Canada.

Put your face in a costume from Jennie Myrle's homelands.

After three prior attempts to become a state, the United States Congress accepted Utah into the Union on one condition. This condition was that the new state rewrite their constitution to say that all forms of polygamy were banned. The territory agreed, and Utah became a state on January 4, 1896.
1909 · The NAACP is formed