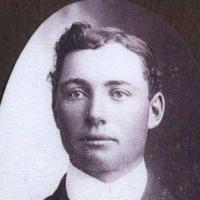 The Life of Franklin James

Put your face in a costume from Franklin James's homelands.

English (of Norman origin): nickname for a soldier or for a belligerent person, from Old French (de la) werre, (de la) guerre ‘(of the) war’. Compare Delaware .