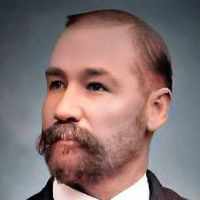 The Life Summary of Ephraim Hesmer

When Ephraim Hesmer Nye was born on 6 August 1845, in Tonbridge, Kent, England, United Kingdom, his father, John Nye, was 38 and his mother, Charlotte Emline Osborne, was 28. He married Harriet Maria Horspool on 9 February 1867, in Salt Lake City, Salt Lake, Utah, United States. They were the parents of at least 2 daughters. He immigrated to Portland, Victoria, Australia in 1852 and lived in Portland, Victoria, Australia in 1852. He died on 15 May 1903, in Columbia, Richland, South Carolina, United States, at the age of 57, and was buried in Ogden City Cemetery, Ogden, Weber, Utah, United States.

Put your face in a costume from Ephraim Hesmer's homelands.

South Carolina is where the first shots of the Civil War were fired.

by Gerald E. Jones And again, verily thus saith the Lord, let my servant Orson Hyde and my servant Samuel H. Smith take their journey into the eastern countries, and proclaim the things which I have …