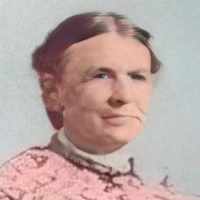 Put your face in a costume from Alice Ann Eckersall's homelands.

Ann Redford was born 27 May 1846 at Pilkington, Lancashire, England, the 4th child and only daughter of Robert Patefield and Lettice Eckersall Redford. She was born and raised in the church. when s …