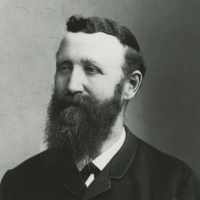 The Life Summary of Anthon Lorenzo

When Anthon Lorenzo Skanchy was born on 17 September 1839, in Lademoen, Søndre Trondhjem, Norway, his father, Ellend Lorentzen Schancke, was 39 and his mother, Jochumina Olsdatter Anzion, was 42. He married Ane Kristine Jacobsen in 1868, in Norway. They were the parents of at least 3 sons and 1 daughter. He lived in Søndre Trondhjem, Norway in 1839. He died on 19 April 1914, in Logan, Cache, Utah, United States, at the age of 74, and was buried in Logan, Cache, Utah, United States.

Put your face in a costume from Anthon Lorenzo's homelands.

The usual English form of the old Roman family name Antonius, which is of uncertain (probably Etruscan) origin. The spelling with -th- (not normally reflected in the pronunciation) represents a learned but erroneous attempt to associate it with Greek anthos ‘flower’. In the post-classical period it was a common name, borne by various early saints, most notably a 3rd-century Egyptian hermit monk, who is regarded as the founder of Christian monasticism.