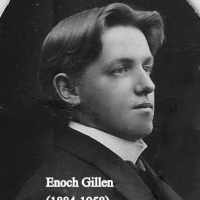 Camp Murray was established in 1885 and housed a portion of the Ninth Infantry Regiment. The camp was built to protect the railroad and train soldiers.