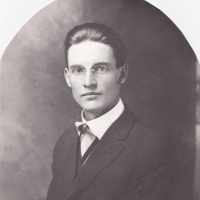 The Life of Bertrand Wilson

Put your face in a costume from Bertrand Wilson's homelands.

English (Somerset):1. nickname for someone with a peculiarity or deformity of the foot, from Middle English fot (Old English fōt), or in some cases from the cognate Old Norse byname Fótr. 2. topographic name for someone who lived at the foot of a hill.

Grandfather was a hard working man. He always had a garden near their homes. He was stern, strict, yet fair. He played the trombone in a band. He was a good carpenter and auto mechanic. Later in l …