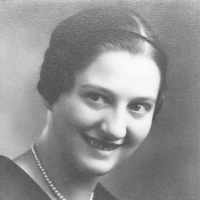 The Life of Brunhilde Emma

When Brunhilde Emma Neumann was born on 25 April 1909, in Leipzig, Saxony, Germany, her father, Ludwig Karl Neumann, was 30 and her mother, Kamilla Gertrud Rossberg, was 27. She married Jens Emil Albertsen about 1932. She died on 30 November 1991, at the age of 82, and was buried in Ventura, Ventura, California, United States.

Put your face in a costume from Brunhilde Emma's homelands.