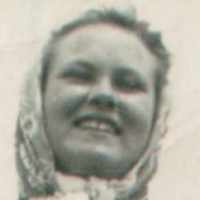 The Life of Myra Joy

Put your face in a costume from Myra Joy's homelands.

The Star-Spangled Banner is adopted as the national anthem.
1936 · Panguitch Ladies Rhythm Band

A small group of ladies from the town, got together and began to sing at special programs, weddings, and social activities. They soon added instruments and got more and more popular. They went on to perform on the Margaret Masters TV program in Salt Lake. Even though the original members of the band aren't around anymore, the band still plays at special events throughout Southern Utah and they perform every 24th of July in the Pioneer Parade.
1951 · The Twenty-Second Amendment

French (Lefèvre): occupational name for an ironworker or smith, Old French fevre. One of the most common names in France from an early date, this was taken to Britain and Ireland by the Normans, by the French to Canada, and by the Huguenots (with the variant form Lefebre) to colonial America and elsewhere.In Canada, there were so many bearers of this name that many nicknames and epithets (secondary surnames or ‘dit’ names) were employed to distinguish between one family and another. Thus, for example, the Lefevre called Descoteaux became Hill by translation, and the Lefevre called Boulanger became Baker . Since fevre ‘smith’ had ceded as a general vocabulary word to forgeron in French, the meaning of the name was no longer understood; in some cases it was reconstructed as Lafeve (Latin faba) and translated as Bean .