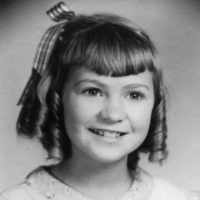 Put your face in a costume from Dorothella's homelands.

The G.I. Bill was a law that provided a range of benefits for returning World War II veterans that were on active duty during the war and weren't dishonorably discharged. The goal was to provide rewards for all World War II veterans. The act avoided life insurance policy payouts because of political distress caused after the end of World War I. But the Benefits that were included were: Dedicated payments of tuition and living expenses to attend high school, college or vocational/technical school, low-cost mortgages, low-interest loans to start a business, as well as one year of unemployment compensation. By the mid-1950s, around 7.8 million veterans used the G.I. Bill education benefits.
1952 · Uranium in Moab

Uranium mining in Utah has a history going back more than 100 years but, it started as a byproduct of vanadium mining. With the development of Nuclear Weapons, Utah saw a uranium boom in the late 1940s and early 1950s, but uranium mining declined near the end of the Cold War. Currently Uranium is still being mined but just a small amount for power plants and for research.
1961 · The Twenty-Third Amendment

Scottish: topographic name for someone who lived by a water channel, Middle English, Old French cond(u)it (Late Latin conductus, a derivative of conducere to lead).