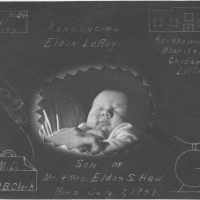 The Life of Eldon LeRoy

When Eldon LeRoy Reid was born on 7 July 1941, in Chicago, Cook, Illinois, United States, his father, Eldon Stringham Reid, was 28 and his mother, Elayne Warnock, was 24. He died on 2 October 1981, in Imola, Napa, California, United States, at the age of 40, and was buried in Sigurd Cemetery, Sigurd, Sevier, Utah, United States.

Put your face in a costume from Eldon LeRoy's homelands.

Caused by the tensions between the United States and the Empire of Japan, the internment of Japanese Americans caused many to be forced out of their homes and forcibly relocated into concentration camps in the western states. More than 110,000 Japanese Americans were forced into these camps in fear that some of them were spies for Japan.
1945 · Freedoms of the Air

The primary goal of  the Chicago Convention was to establish the International Civil Aviation Organization. This organization establishes the rules of airspace, aircraft registration and safety, and details the rights of the signatories in relation to air travel. The Convention has since been revised eight times.
1952 · Uranium in Moab

Scottish:1. nickname for a person with red hair or a ruddy complexion, from Older Scots reid ‘red’. 2. topographic name for someone who lived in a clearing, from Old English rȳd ‘woodland clearing’. Compare English Read .