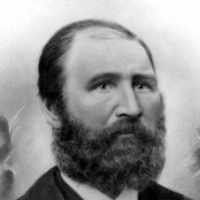 The Life of Alfred George

When Alfred George Woodland was born on 25 December 1835, in Puckington, Somerset, England, United Kingdom, his father, George Woodland, was 25 and his mother, Hannah Prince, was 24. He married Elizabeth Ridgeway on 11 November 1860, in Caerwent, Monmouthshire, Wales, United Kingdom. They were the parents of at least 1 son and 2 daughters. He lived in Caerwent, Monmouthshire, Wales, United Kingdom in 1871 and Richmond, Virginia, United States in 1901. He died on 5 November 1901, in Richmond, Cache, Utah, United States, at the age of 65, and was buried in Richmond City Cemetery, Richmond, Cache, Utah, United States.

Put your face in a costume from Alfred George's homelands.

In 1844 when Robert Lumpkin bought land in Virginia, this would be the spot of the Infamous Slave Jail (or Lumpkin’s Jail). The slaves would be brought here during the slave trade until they were sold. Lumpkin had purchased the land for his own slave business.
1854 · The Crimean War

English: topographic name for someone living in an area of woodland, from Old English wudu ‘wood’ + land ‘land’, or a habitational name from any of the numerous places, for example in Devon, Dorset, Kent, and Somerset, named with these elements.

I was born Oct. 21, 1890 in Richmond, Cache county, Utah, son of Alfred Woodland and Nielsine Dorthea (Sena) Thompson. The population of Richmond was 1800, mostly L.D.S. members. Most of the o …