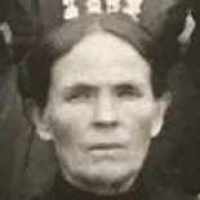 The state known as Utah began when Brigham Young led a group of LDS pilgrims seeking freedom from religious persecution into the Great Salt Lake Valley, where they established a settlement in 1847. The golden spike completing the first transcontinental railroad line was driven at Promontory, Utah, in 1869, leading to a further influx of settlers.
1863

1 English: habitational name from places in Norfolk and Cumbria named Colby, from the Old Norse personal name Koli (a byname for a swarthy person, from kol ‘(char)coal’) + Old Norse býr ‘settlement’.2 Variant spelling of Norwegian Kolby, a habitational name in Akershus, with the same etymology as 1.

1966 Augusta Ellen Teeples Fullmer. I was born April 5, 1892 at Burville Sevier Co. Utah. I was baptized by Henry Burr. My Father's name. My Mother's name. My Brothers and Sisters. Ransford Henry Te …