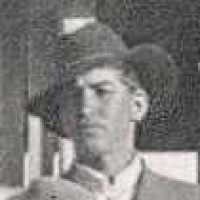 The Life of Clarence Franklin

When Clarence Franklin Hancock was born on 1 July 1894, in Eden, Graham, Arizona Territory, United States, his father, Franklin Lionel Hancock, was 22 and his mother, Elizabeth Rebecca Tryon, was 18. He married Velda Joanna Palmer on 1 October 1919, in Salt Lake City, Salt Lake, Utah, United States. They were the parents of at least 1 son and 4 daughters. He registered for military service in 1919. He died on 30 August 1974, in Barstow, San Bernardino, California, United States, at the age of 80, and was buried in Thatcher Cemetery, Thatcher, Graham, Arizona, United States.

Put your face in a costume from Clarence Franklin's homelands.

Dedication To the descendants of the noble men and women who sacrificed much in their life's journey we lovingly dedicate this record of their cherished lives and accomplishments. Most of the informat …