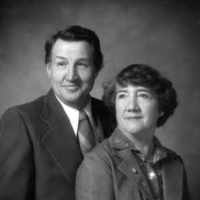 The Life of William Jerome

When William Jerome Miller was born on 21 June 1923, in Ecorse, Wayne, Michigan, United States, his father, William Miller, was 18 and his mother, Elizabeth Ann Or Mary Pattenaude, was 16. He married Anita Palfreyman on 6 October 1943. They were the parents of at least 2 sons. He died on 23 August 1981, at the age of 58, and was buried in Springville, Utah, Utah, United States.

Put your face in a costume from William Jerome's homelands.